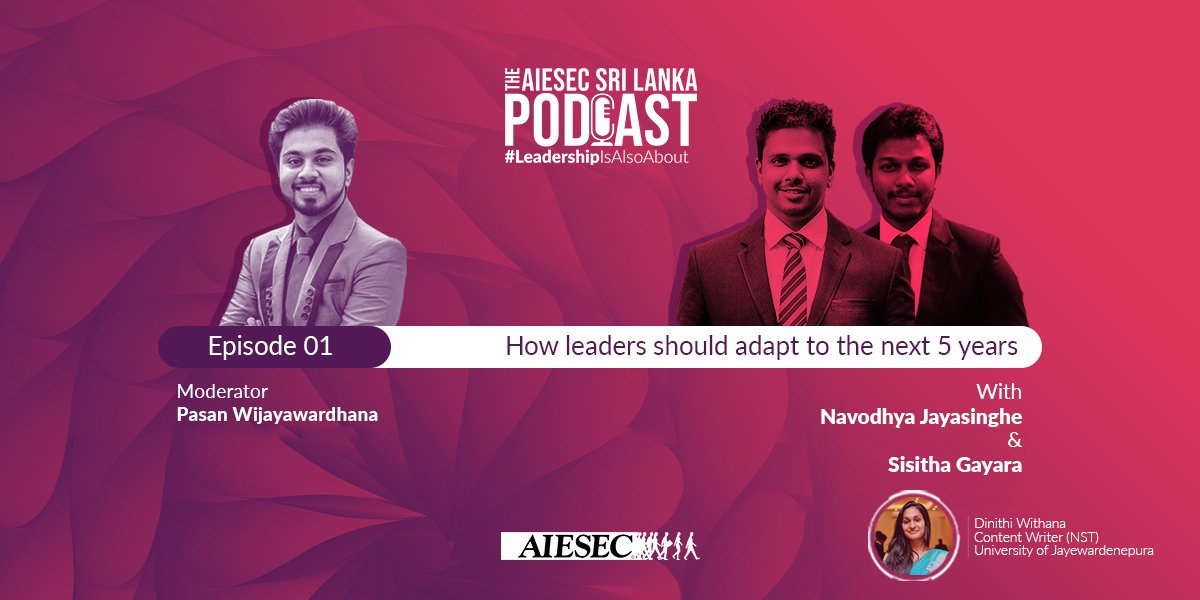 A Leader is the one who knows the way, goes the way and shows the way

Implementing a new and a productive medium to bring the concentration of the Sri Lankan Youth more on the fact of Developing Leadership, The National Showcasing Team of AIESEC in Sri Lanka have initiated a Podcast Series which would bring out the strategies, visions, goals, optimism the great young leaders are maintaining throughout their journey of becoming the great personalities whom they have become today.

There may be thousand and one reason behind the factor of being an inspiring leader. Maybe because of the influence of some external force or maybe it is your internal will that inspires you to become a leader who leads the change. Raising his voice to respond to the 1st question of the discussion, ” What or Who Inspired you to become the leader that now you are today?” , Mr. Navodya Jayasinghe said that it wasn’t any external force that inspired him to become a leader but it was how the concept of reliability had been impacting his life throughout his leadership career. He always wanted to be reliable from the childhood and when growing up with different leadership roles, the passion to become reliable, accountable, and responsible taking the ownership of the responsibilities he was given, inspired him to become a leadership personality. 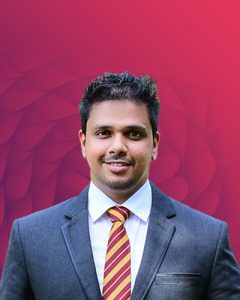 Answering the same question Mr. Sisitha Gayara explained his inspiration for being a leader telling that it was his passion to guide people, empowering them and helping them to realize their skills and talents as true leaders. Adding to that he said he was always inspired by the great leadership qualities of the great leaders of the world and those qualities which he saw also inspired him to develop himself to a leader throughout his journey. The next question which was based on pointing out the milestones of their AIESEC journey and the biggest challenges they faced in the journey of becoming a leader, was answered by Mr. Navodya Jayasinghe briefly explaining his 5 years of AIESEC career which started from playing the leadership roles of a Local Committee Vice President, Local Committee President, Membership Committee Vice President, Membership Committee President, and currently Finance Manager of AIESEC International 20/ 21 term. Further, he stated that he believed that the Local Committee President Role he held, as still challenging since that allowed him to develop himself a lot, giving him a powerful experience of leading the most amount of people throughout his journey. Except for that, he explained how the role of Member Committee President 19/20 term became challenging since that made him lead his followers, being highly solution-oriented in the situation that occurred due to the Easter Bomb Attacks in 2019. Briefing the milestones he passed and the challenges he faced throughout of his AIESEC journey, Mr. Sisitha Gayara answered to the same question telling that among all the leadership roles he held from Local Committee President to Member Committee President-Elect 20/21 term, he also believed that the role of Local Committee President as challenging since it made him realize the responsibilities and the gravity of a leadership role of guiding people, also keeping the core vision of the organization, being accountable to the decisions he makes to move forward as a leader. Adding to that he mentioned he expected the role of Member Committee President in 20/21 term, to be filled with challenges in the prevailing situation of the world under the COVID 19 Pandemic. 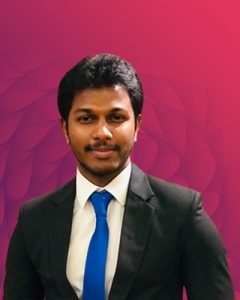 Since the main topic for the discussion was to consider the leadership in the next five years, the focus on development plans was given a priority throughout the discussion. Giving an insightful answer to the next question directed by Mr. Pasan Wijayawardhana focusing on the fields which took the highest attention of these two leaders in their development plans, the Finance Manager of AIESEC International and also the Member Committee President in 19/20 term Mr. Navodya Jayasinghe answered the question 12, mentioning that Leading the Transformation was the concept he implemented during his term as the Member Committee President. Then he explained more about how his team brainstormed about leading the transformation through innovation and technology in order to develop the skills, knowledge, and the experiences of Sri Lankan Youth regarding problem-solving and creative, critical thinking. Answering to the same question, Mr. Sisitha Gayara the Member Committee President-Elect stated that being solution-oriented would be the biggest confidence that a leader should have since there might be some hard times where we would not be able to continue the same development plan which we initiated at the beginning of the term. Adding to that he said he was focusing on development plans which concerned more about developing leadership, increasing the number of cross-cultural exchanges, but with the current situation under the outbreak of COVID 19 Pandemic, he would have to think out of the box yet still focusing on developing leadership since it is the core vision of this amazing organization. Going deep in his response, he mentioned that as he discussed with the team of Member Committee Vice Presidents, he would concern more about Financial Management, Membership Management, and Innovation would be the key focusing areas in the term 20/21. Mr. Pasan Wijayawardhana raised his next question focusing on the role of leadership through uncertainties. Responding to the question, “As a leader which methods you would practice to motivate your followers in order to ignite their enthusiasm in engage in achieving success even in uncertain periods?”, Mr. Navodya Jayasinghe related to the period which they had to survive through the incident of Easter Bomb Attack, where they had to cease all most of the operations done through AIESEC in Sri Lanka. Taking that as the example he mentioned that never forget the core purpose of the AIESEC organization which is to build and develop leaders developing confidence in order to face future challenges. Further, he mentioned that uncertainties would be the best opportunity to develop leadership taking the uncertainties as the strength and the inspiration. The next question was directed to Mr. Sisitha Gayara regarding the importance of demonstrating integrity for a leader to maintain healthy relationships with the followers. Responding to that question successfully, he stated that according to his view being true to ourselves and our words can be introduced as Demonstrating Integrity. He mentioned that leadership is always connected to integrity and if a leader needs to build the trust he must be authentic and he should demonstrate integrity to inspire the followers to build faith in his actions. The focus of the next question was on the possible changes and the new trends in the community that would occur with the challenges the world would face in the future especially after the COVID 19 Pandemic. Raising his voice for this question, Mr. Navodya Jayasinghe stated, he strongly believed the fact that the people who work in any cooperation, the organization would realize the difference between a Manager and a Leader by the end of the COVID 19 Pandemic since this has given a great opportunity to see the transparency of the actions they make. Further, he mentioned that he wished to see an enormous change in the educational system in Sri Lanka mostly in the fields that the students and the educational industries would focus on. Going deep into his point Mr. Navodya Jayasinghe mentioned that Sri Lanka is still having a system where the responsible parties persuade the students to focus only on few specific subject areas which narrow their ability of thinking and innovating further. This is expected to be changed since the community now would have a better understanding and a perspective regarding the demand for true leaders who have vast experiences, knowledge from various areas with the ability to come up with effective solutions for the upcoming challenges. AIESEC; as the world’s largest youth-run organization of the world, always concerns more about developing true leaders to the world who inspire the followers also developing himself, going through practical experiences in the challenging environments. Coming to the last few minutes of the 1st discussion of the Podcast Series powered by the National Showcasing Team of AIESEC in Sri Lanka, Mr. Pasan Wijayawardhana directed the final question to Mr. Sisitha Gayara questioning about the importance of having precise and well – defined goals regarding the future of the AIESEC in Lanka. Responding to this question with full of confidence, Mr. Sisitha Gayara stated that that visionary leaders have a lot of followers and well-defined goals followed with the visions. Further, he mentioned that the role of a true leader must be guiding the followers, therefore a leader must have a crystal clear vision and well-defined goals in order to make a positive impact on the followers. The 1st discussion of the Podcast Series initiated and powered by National Showcasing Team of AIESEC in Sri Lanka which is focused on Developing Leadership, terminated successfully revealing the journeys of the triumph of two great Leadership Personalities.
Last modified: 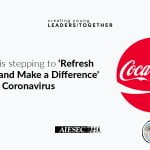 Next Story:
Coca-Cola is stepping to 'Refresh the World and Make a Difference' challenging Coronavirus